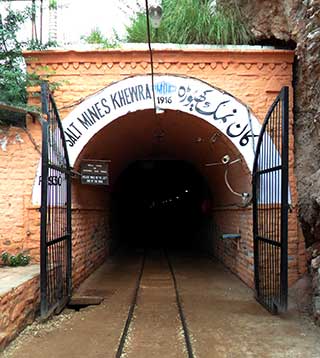 The Khewra Salt Mines is located in Khewra, north of Pind Dadan Khan,an administrative subdivision of Jhelum District, Punjab, Pakistan. It is Pakistan's largest and oldest salt mine and the world's second largest.It is a major tourist attaction. Its history dates back to its discovery by Alexander's troops in 320 BC, but it started trading in the Mughal era. The mine was discovered, however, not by Alexander, nor by his allies, but by his army's horses, when they were found licking the stones.

Khewra Salt Mine is situated in Pind Dadan Khan Tehsil of Jhelum District. Located about 200 km from Islamabad and Lahore, it is accessed via the M2 motorway, about 30 kilometers off the Lilla interchange while going towards Pind Dadan Khan on the Lilla road. Khewra mine is about 945 feet above sea level and about 2400 feet into the mountain from the mine entrance. The underground mine covers an area of 110 km2.